It seems like there is an unlimited number of things to do in Miami, Florida, ranging from the famous Seaquarium to the elegant and opulent Vizcaya Museum and Gardens. Miami is warm year round, and that means the many local beaches are always accessible when it is time to relax. There is a growing demand for Diagnostic Medical Sonographers as the health care industry continues to expand in 2017 to accommodate the diverse and growing population in this city.

There is 1 excellent CAAHEP sonography school in Miami as of 2017, which is Miami Dade College. The sonography program takes approximately two years to complete, and 79 percent of the students graduate on time. Attending a school accredited by the Commission on Accreditation of Allied Health Programs (CAAHEP) is recommended because it provides the critical class work and clinical training needed to become ARDMS certified. There is a very large student population in Miami. Over 70,000 students attend private and public colleges and universities.

The average annual salary for Diagnostic Medical Sonographers in the Miami-Miami Beach-Kendall metropolitan area was $58,040 per the May 2016 federal occupational survey. Though the average hourly rate of $27.90 is below the national average hourly rate of $34.49 for this position, there is a high concentration of ultrasound technology jobs in the area. In 2016 there were 740 employed sonographers, and the number of available positions is expected to grow as the national health care program expands. This area has a high population density, contributing to a high demand for health care services. Numerous smaller cities surround Miami, and they also have employment opportunities for ultrasound technicians. | See Job Openings

Current salary surveys conducted by job search companies indicate the sonography salaries are on the rise. In 2017, salaries are likely to continue rising as the demand for ultrasound technology increases in response to a growing and aging population. 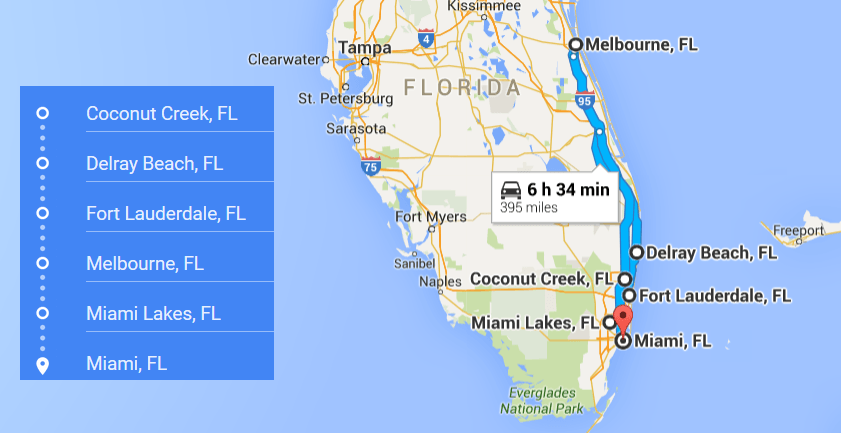 The following 5 nearby cities in Florida have accredited sonography programs as of 2017:

Florida is a unique state with the Atlantic Ocean to the east and the Gulf of Mexico to the west. Florida is 447 miles long, and Miami is close to the southern tip of the state. Therefore, only Florida’s state line in the north borders other states, which are:

Find schools and get information on the program that’s right for you.

8 Steps to Becoming an Ultrasound Technician